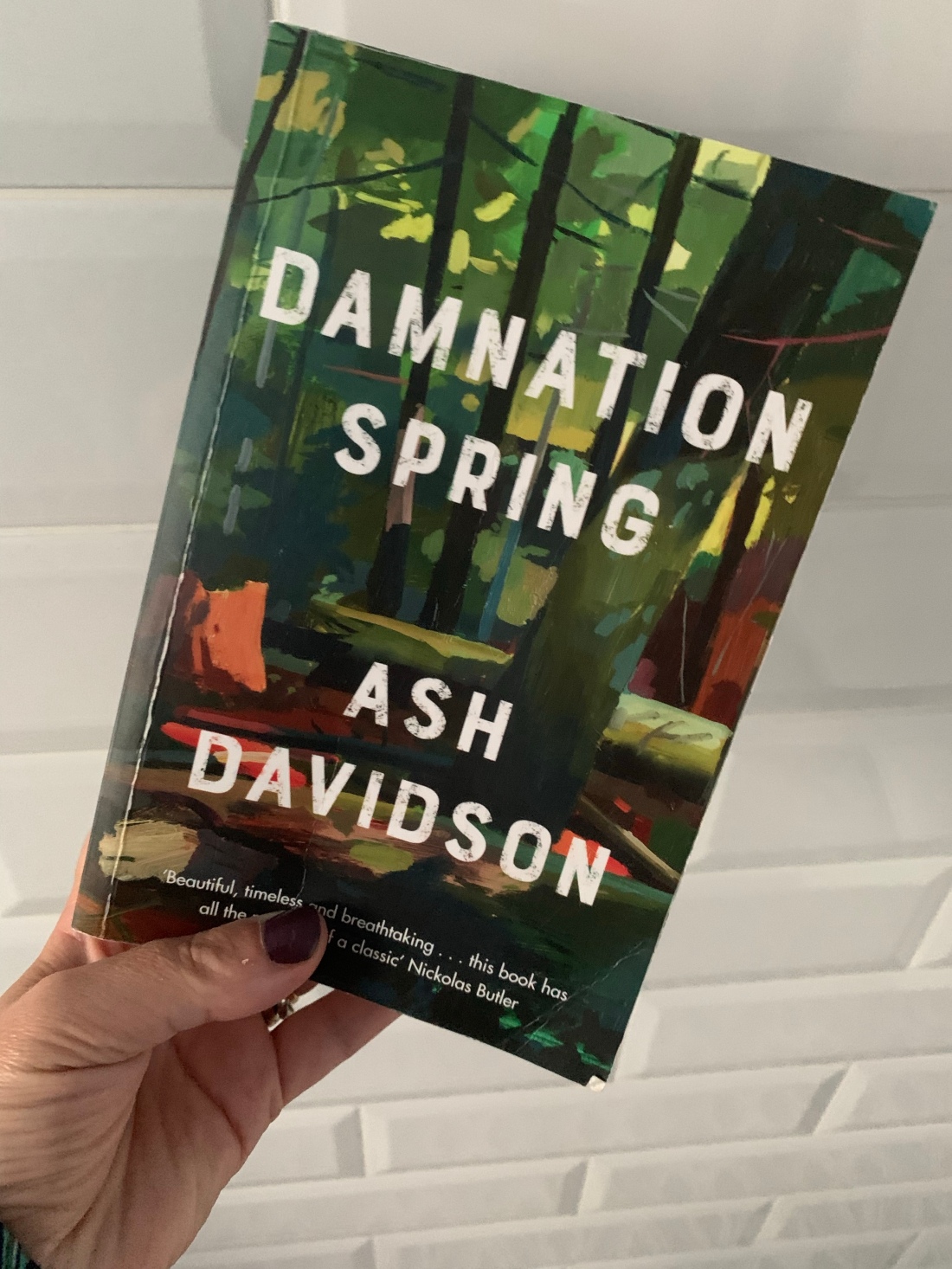 It’s been a while since I wrote a review as I have been having myself a little summer break. But this barnstormer of a book; Damnation Spring by Ash Davidson published this week by Tinder Press, has inspired me to hop back on the blog.

Set on the Californian coast, amongst the logging community of the 1970’s this is a novel that will touch every part of you. It is beautifully told, beautifully constructed and worth every single minute of your reading time.

It is 1977 and Rich Gunderson’s family have been logging the giant redwoods for years. His father lost his life in one of the all too frequent logging accidents and Rich wants a better future for his son Chub. With this in mind he buys up a local plot of land, the yield of which could set his family up for life. But only if he can get to it and that’s a risk of it’s own.

His wife Colleen is the community’s unofficial midwife, a role that she finds both fulfilling and heartbreaking in equal measure, as she longs for a second child of her own. After suffering several miscarriages Colleen is desperate and grieving.

When a face from the past arrives in the town then something rotten at the core of the community threatens to rise to the surface. Each family has a different opinion, but the very survival of this way of life suddenly seems to hang in the balance.

Written with passion, heart and breathtaking complexity, this is the story of all sides of the argument. It is the story of economics and the survival of a way of life that finds its self pitted against the continuation and protection of the landscape that supports it existence.

By creating characters with honest and complex motivations, characters who lives are laid bare for all to see Davidson brings this debate to life. Nothing in this story is ever as clear cut as we would imagine it to be.

This is a story of powerful motivations, strong people, and ultimately love; all set against the fragile and majestic beauty of the land.

One of my books of the year so far. Thank you Caitlin Rayner for my gifted copy and the very welcome introduction.

I read a fair amount of nonfiction, but what I read varies enormously in both style and content. I always find it hard to pin down what draws me to a nonfiction title, but if pressed for an answer I think I would say I need to encounter honesty and truth.

Both of these qualities are found in painful abundance in this beautiful book. Will this house last forever? is a very personal examination of love, family relationships and ultimately grief. It examines the death of Xanthi Barker’s father, the poet Sebastian Barker. And it tries to come to terms with the complexities and intricacies of their love, relationship and the depth and confusing grief Xanthi feels after her Father’s untimely death.

Xanthi was just a baby when her Father left her and her older brother, walking away from his family to concentrate on his writing and another relationship. For all of her life Xanthi seemed to be seeking the father she barely knew. His presence was confined to holidays where the usual rules did not apply and the boundaries between parent and child were sketchy and blurred.

During his sudden but devastating illness Xanthi tried her hardest to understand her Father, his work and motivations; and to cling on to her hope that in some way she could heal their relationship and in the process make herself whole.

This is a book filled with the honesty and inevitable pain of grief and discovery. Of coming to terms with the process of having to let go, when letting go seems impossible. And of making peace with the ghosts of the past even if you don’t really understand who they are and where they have been.

Throughout the prose the rawness of emotion, emotion of all kinds, is constantly apparent. At times the words are like a gentle balm, lulling both reader and writer into acceptance. At times they are like razor blades dragging mercilessly over the surface of old and hidden wounds.

This book is a work of beauty, a brave treaty on personal grief and individual acceptance and understanding. It is a book that will linger long.

How the one-armed sister sweeps her house is a novel alive with with warnings. From the long established local tale about a disobedient girl that Wilma tells her granddaughter, to the fate of Tone, a young man who has been up against it his who life, the sense of a cautionary tale is never lost.

This is a story whose intensity hits you from the off and is maintained throughout. This is the story of Barbados, or more specifically a town on the beach. A town of stark constraints, where tourists occupy sprawling beach front villas, but where poverty, drug abuse and violence stalk the local community.

Here is the story of three women. Wilma, married young and having endured years of domestic abuse at the hands of her husband. Unable to protect her daughter from her own father, Wilma has raised her granddaughter Lala. With the iron rod and tales of despair Wilma has tried to keep Lala close.

But Lala falls in love. She too marries young and finds herself trapped in the same cycle of abuse that her grandmother and mother have experienced. The story begins with traumatic premature birth of her daughter, born on the night when Adan her husband kills a white man in a robbery gone wrong. Baby’s life is short, but it is the catalyst for a series of events tinged with a desperate inevitably.

Mira is the wife of the man who Adan shot. A local girl who has married in to wealth, who is grieving not just the loss of her husband, but her own longing to be a mother, the loss of her step children and the fact she never got the chance to tell her husband how she felt.

The lives of these three women have their differences but all are intertwined. Each life is a struggle. All have experienced extreme poverty, all know what it is like to want the world to be different, to have the briefest taste of your dreams only to have them snatched away. Each women is fighting daily for her life, in a system, a society that seems riddled with violence and oppression. Each leads a life where domestic violence is the norm rather than the exception and where mothers are teaching their daughters to survive rather than leave.

Each of these women make sacrifices to ensure their own survival. Each is faced with terrible choices, that aren’t really choices at all. The power of this society seems to lie with the men, and women are fighting from the bottom up.

But there is power and hope in these women’s stories. They are smart, they are watchful and they take their chances where they can. As the novel reaches it’s climax there is a sense that better things may be in reach.

This tale is told in words so electric, so vibrant that they sing from the page. The sense of place is tangible from the start. These characters move seamlessly through a world so real you can feel the heat of the sun and the sand between your toes. There is pain and desperation but also humour, humanity, and a real connection with these characters, which leaves you immersed and invested. Each small detail, each back story gives the story motivation and credibility. It is a story whose power gathers momentum with each turn of the page.

How the one-armed sister sweeps her house is published today, 21st January 2021 by Tinder Press. I feel privileged to have a chance to read and review this powerful and beautifully hard hitting novel. Watch this one closely, it is on a path to greatness.